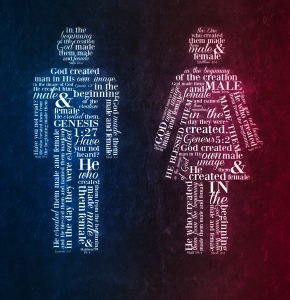 In Evangelical Feminism and Biblical Truth (EFBT) Wayne Grudem is at his complementarian finest as he explains from Genesis why God created men and women equal yet distinct. While egalitarians argue the fall caused gender distinctions and that Christ’s redemption erased them (as explained in their reading of Galatians 3:28), Grudem shows how God created men and women with beautiful distinction from the beginning.

What follows are a synopsis of his points from Evangelical Feminism and Biblical Truth, pp. 30–42. For reasons explained here, I have left off his argument for gender distinction based upon trinitarian analogy. That theological argument is not necessary for making the claim that God created men and women equal, yet different. Therefore, I list Grudem’s nine biblical arguments for biblical complementarity.

To the original audience who understood and lived according to the principle of primogeniture, the order of Adam and Eve had theological significance. Because the man came first, he was to lead. Because the woman came second and derived her existence from Adam, she was to follow.

This is how Paul read Genesis. He did not permit a woman to teach or have authority over men in church because the man was ‘formed first and then the woman’ (2 Tim 2:12–13). Likewise, he called for men and women to honor their respective ‘heads’ (1 Corinthians 11:3), a teaching he also grounds in creation. Therefore, the original order speaks volumes about God’s design for men and women.

Adam had the responsibility to represent his family and the human race. In Genesis, God gave Adam the commission to cultivate and keep the garden, as well as not eating from the tree (Genesis 2:15–17). When the man and his wife sinned, God “called to the man” (Gen 3:9). This calling to Adam indicates that Adam had a responsibility to God not shared by the woman.

Likewise, in the New Testament, the Scriptures make a parallel between Adam and Christ. In Romans 5:12–21, Paul attributes the humanity’s fallenness to Adam, not Eve. And in 1 Corinthians 15:45–49, Christ “the last Adam,” is compared to the first Adam, not Eve. Hence, the role of covenantal head was uniquely Adam’s.

3. The Naming of Woman

In Genesis 1, naming is a ‘god-like’ vocation.  In Genesis 1:5, Elohim named the light “Day,” and the darkness “Night.” In Genesis 1:8, God named “heaven,” in verse 10, he named the “Earth” and the “Seas,” and finally in verse 26, he called the human race “man.” In short, one way God’s authority is evidenced in creation is his ability and right to name his creation.

Similarly, when Adam named his wife—“woman” in 2:23 and “Eve” in 3:20—it is evidence that God has delegated to him a measure of his authority in the home. Though we read this point through the skewed perspective of the fallen world—a world filled with demeaning husbands who berate their wives with ugly names—in Genesis 2:23, Adam’s ‘naming’ of Eve is celebratory and compassionate. His naming was not intended to demean or belittle but to cherish and nourish the woman God gave him (cf. Ephesians 5:28-30).

4. The Naming of the Human Race

In addition to Adam naming Eve, the human race is also called “man” not “woman.” While this point is implicit in Genesis 1:26–27 (“Let us make man in our image . . . So God created man in his own image, in the image of God he created him; male and female he created them”), it is most clear from Genesis 5:2. Moses writes,“Male and female he created them, and he blessed them and named them Man when they were created.”

Mankind is not given a gender neutral name; nor does the name come after the Fall. God names the human race man “when they were created.” Like when a woman marries a man and takes his surname, the man’s name covers the woman because it is the man’s responsibility to care for, provide, and protect the “weaker” sex (see 1 Peter 3:7).

Related to number 2, Adam’s accountability before God indicates a unique role that Adam had and Eve did not. When Adam sinned, God approached the man. By contrast, the Serpent, cunning in his craftiness, spoke to the woman first, effectively subverting the order that God intended in the human race.

In the Old Testament, this order was confirmed by the husband’s responsibility to superintend his wife’s oaths (see Numbers 30). Likewise, under the New Covenant, his accountability remained. First Corinthians 11:3 repeats the male-female taxis when Paul states, “But I want you to understand that the head of every man is Christ, the head of a wife is her husband, and the head of Christ is God.”

Moreover, since men are called upon by God to lead the church (1 Timothy 3:1-7; Titus 1:5-9), men will face a stricter judgment for their leadership responsibility (Hebrews 13:17; cf. James 3:1). And since the family of faith and the nuclear family function analogously, men in the home will likewise have the primary accountability for the condition of their home. This is evident from Genesis 1-3 and from the household codes in Ephesians, Colossians, and 1 Peter which address men as the leader of the home.

6. Men and Women Complete the Cultural Mandate in Different Ways

Genesis 2:18 specifically states that the woman was made for the man. Not vice versa. This role of “helper” does not diminish the worth of Eve or any woman, but it does indicate that the woman was created with specific reference to her husband. Accordingly, the independent, self-sufficient woman is a myth.

At the same time, God gave man a task to subdue and rule the earth, which he could not complete without a wife. Together, they would subdue and rule (Gen 1:28). But they would do so in different ways—the man oriented towards the field, the woman oriented towards the home (cf. Titus 2:3–10). The specificity of the curse—with the woman being afflicted with pain related to children and the man being afflicted with thorny fields—indicates God’s curse came upon the order that already existed, not the establishment of something new (Gen 3:14–19). Therefore, God’s design for humanity show clear distinctions between men and women.

7. The Curse Exacerbates the Conflict Brought About by Sin

Grudem writes, “The curse brought a distortion of previous roles, not the introduction of new roles” (EFBT, 39). In God’s pronouncement, he set enmity between the serpent’s seed and the woman’s seed, but he also declared that women would desire to rule over their husbands (compare 3:16 to 4:7) and men would in turn treat their wives with harshness.

This relational conflict indicates a disordering of roles, not the creation of new ones. Again Grudem highlights the distortion: “Eve would now rebel against her husband’s authority and Adam would misuse that authority to rule forcefully and even harshly over Eve” (ibid., 40). Biblical history and painful, personal anecdotes confirm this biblical truth. Yet, such caricatures of manhood and womanhood do not overturn God’s created design.

In concord with this understanding of the curse—outlined in point seven—the New Testament speaks of men crucifying their own desires to love and lead their wives (Eph 5:25–33) and women humbly submitting themselves to their husbands for the sake of the Lord (Eph 5:22–24). Redemption, instead of obliterating roles, restores to them. “God reestablishes . . . the beauty of the relationship between Adam and Eve that existed from the moment they were created” (EFBT, 41).

Salvation in Christ blesses husbands and wives with new life so that they can live out their marriages as God intended in the beginning. Such re-creation at home spills over into the church, and when enough homes and churches cultivate restored relationships between men and women, it also permeates culture with men and women who reflect (albeit inconsistently) God’s created design. The result is a culture that reflects God’s normative design. Tragically, with the rise of feminism, our culture has moved further and further away from God’s created order.

The way that the New Testament speaks about marriage is another reminder that the institution that God created is not defined and structured by the Fall, but by creation. In Ephesians 5:31–32, Paul writes, “There a man shall leave his father and mother and hold fast to his wife, and the two shall become one flesh.” This verse, as many have recognized, is a direct quotation from Genesis 2:24. In the next verse, Paul explains, “This mystery is profound, and I am saying that it refers to Christ and the church.” Astounding! As Paul thinks of marriage in the Garden and the formation of the church with the gospel, he says that the mystery of marriage is that the one flesh union between a man and a woman reflects Christ and the church.

While hidden for generations, with coming of Christ the world now has the light to see the reason for God’s complementary union of a man and a woman. Instead of being arbitrary or simply a means of proliferating creation; this union reflects Christ and his bride, the church. Therefore, because the roles of Christ and his bride are not interchangeable, marriages are not intended to be egalitarian. Husbands and wives cannot shape-shift their roles or work out some sort of agreeable compromise. Christ and the church define what marriage is, and as Paul links this new creation reality to the beginning of the world, he does not root gender roles in the Fall. He relates creation to the new creation. For this reason Grudem can make the application: “There is a leadership or headship role that belongs to Christ and that the church does not have. Similarly, in marriage as God created it to be, there is a leadership role for the husband that the wife does not have. This relationship was there from the beginning in Creation, in the beautiful marriage between Adam and Eve in the Garden” (EFBT, 41).

Of course, there is more to say. There are sixty-five more books to consider. But it is remarkable how much Genesis 1–3 speaks of gender complementarity, a view of men and women the rest of Scripture repeats and reaffirms. For a full vision of biblical manhood and womanhood, we will need to consider these points, but always in connection with the original design in creation. This thick portrait of men and women should frame the way we read other passages, words (i.e., kephalē), and books about gender.

To that end, may we honor God by submitting to his revealed will for all who are made in his image—male or female.

3 thoughts on “Established by Creation: Nine Reasons for Biblical Complementarity”