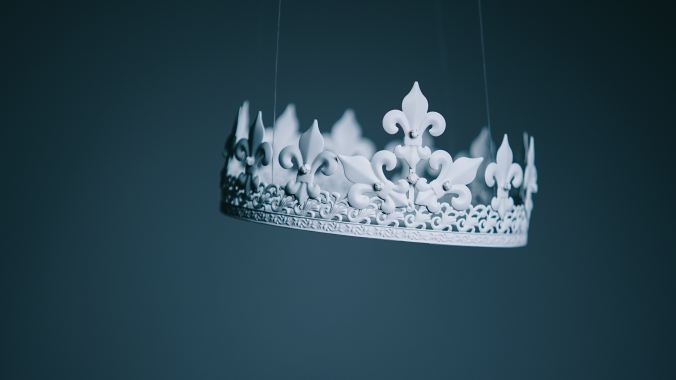 3 When I look at your heavens, the work of your fingers, the moon and the stars, which you have set in place, 4 what is man that you are mindful of him, and the son of man that you care for him? 5 Yet you have made him a little lower than the heavenly beings and crowned him with glory and honor. 6 You have given him dominion over the works of your hands; you have put all things under his feet, 7 all sheep and oxen, and also the beasts of the field, 8 the birds of the heavens, and the fish of the sea, whatever passes along the paths of the seas. 9 O Lord, our Lord, how majestic is your name in all the earth!
— Psalm 8:3–9 —

The “royals,” Prince Harry and Meghan Markle, are in the news again, making a splash about “de-throning” themselves, or at least trying to take a less prominent role among British royalty. That news, coupled with this month’s anniversary of Roe v. Wade—the Supreme Court decision that opened the door to abortion on demand and led to more than 61 million unborn babies being killed in the womb—made me think of an article I wrote a few years ago.

When The Council for Biblical Manhood and Womanhood (CBMW) revamped their website, this post was lost. So I’m posting it again. The argument still stands and we should consider the damaging effects of “de-throning” the image of God and treating babies as less than royal. By contrast, when we recognize that babies—unborn, born, and grown—as the image of God are “royal” by nature, it has massive implications for how we consider abortion in our day.  Let’s consider.

How Royalty Could Change Views on Abortion

A few years ago, when the Duke and Duchess of York, William and Kate, had their first child, Owen Strachan observed that “a royal baby” could never be called a fetus.

Pointing to news agencies—faith-based and secular—Owen observed how those who would commonly refer to an unborn baby as a subhuman “fetus” were unwilling to ascribe such nomenclature to Kate’s baby. He argued that there is in humanity vestiges of morality that transcend stated positions. Thus, when the royal couple had their first baby the media rightly has addressed the child as a baby from the very beginning.

In subsequent pregnancies, the same phenomenon holds. Kate Middleton has had two other children since this article, and in both instances, the language of fetus is absent. Why is that?

As Owen suggested, the language may be traced to vestiges of morality that transcend stated positions. And it may also speak of the way royalty dignifies personhood—a consideration that I believe could help reframe debate about abortion and fetal homicide.

What Royalty Does to the Abortion Debate and Fetal Homicide

In the case of royalty there can be never be a “royal fetus,” because the adjective “royal” is incapable of being aligned with something subhuman. To turn it the other way, the noble status of royalty necessarily requires the subject to be a human baby, not a subhuman fetus. In other words, royal assigns worth the child, an heir of the king. And it would dishonor the crown mightily to refer to the baby as a fetus.

Now, if this is true for a royal couple, why not other couples? Indeed, we see the saw thing happen with pop stars like Beyoncé. Go back to the days when she was expecting and you won’t find descriptions of “Beyonce’s fetus.” It seems that in America, when our royalty—the celebrities who grace magazine covers—are pregnant, their babies are also praised and protected as princes and princesses.

Here is the point: The status of parents is the deciding factor in how to treat and talk about the status of the child. In the case of royalty and those receiving lavish royalties, the “royal” status of the parent is passed onto the pre-born child. And accordingly, the baby in the womb is crowned with human status, thus protecting them from the title “fetus,” and more importantly from the skull-crushing vacuum in the abortionist’s hands.

This is where things get interesting. If this argument stands, a baby must be “dethroned” to become a fetus. As an heir, it cannot be merely a mass of cells or fetal tissue. Rather, it has, on account of its parentage, personhood from the very beginning. In a word, royalty demands human recognition.

And because it does, the conversation about life in the womb needs to (in part) shift terrain. Instead of debating what the life in the womb is and when children should acquire human rights, we need to determine what the child will be. Instead of simply talking about the status of the baby (first, second, or third trimester), we need to consider the royal status of the parent—and it is here that only the biblical worldview can esteem all people, not just silver-spooned kings and queens.

In Egypt, in the days of the Patriarchs, only the Pharaoh was made in God’s image. He was perceived to be a semi-divine son of god. By contrast, when Moses wrote Genesis, he spoke of all people as being made in God’s image (Gen. 1:26–28). Fully aware of how Egyptians spoke of God’s image (Acts 7:22), Moses used the language of “image” polemically. From God’s point of view all children are royal subjects. Therefore, Genesis 1 teaches us that all people, no matter the race, class, education, or privilege of their parents are image-bearers. Likewise, when David wrote Psalm 8, he too understood all humanity to be crowned with glory and honor.

Sadly, apart from a biblical worldview this royal status is lost. In both the ancient Near East and America today, only the children of kings are treated as royalty. And it is at this point that we must return to the biblical viewpoint to see how every parent and child are created with a royal mandate. Indeed, without this biblical worldview, we will lack a major component of defending the unborn. Already the image of God has been a major reason for defending life, but add to it the notion of royalty and the argument grows stronger and esteems all unborn children as worthy of life and protection from death.

Where the Biblical Worldview Meets the World

We might think that such a common sense argument is not needed, but in 2015 the issue of fetal rights entered the news again. USA Today reported that Dynel Lane, a Colorado woman who lured, attacked, and “cut out” the baby from Michelle Wilkins’ stomach, will not face murder charges. In Colorado there is not a fetal homicide law, and therefore she will be charged with a lesser crime. Why? Because in that state, as in all fifty states, children are defined by their material makeup, rather than the royal imprint God has formed in them.

To many eyes of world, a gestating baby is subject to the will of his or her mother. But it also assumes that the baby has no royal pedigree. Contrast this with William and Kate’s baby. What a horror it would be if an attacker ended a princess’s pregnancy. And what an outcry there would be if the prince and princess aborted their heir. Surely, there would be abortion purists who might laud the eaction, but it would complicate matters greatly, because she would not simply be killing a fetus. She would be committing regicide—the killing of a future king (or queen).

In truth, this is exactly what happens when any baby is killed. It is not just a child whose life is taken; it is the life of potential and future royalty. To say it differently, babies are not just optional blessings from God, gifts to be received or rejected at will. They are offspring who will one day rule the universe, image bearers who from the first reflect the glory of the king of the universe. And for that reason we must assert all children, as royal image bearers, have a divine right to life.

But unless and until a child has its royalty restored, it should not surprise us that abortion runs rampant and that savage attacks on pregnant women are not judged as murder. May God have mercy us, and this month as we remember the 61 million who have been aborted in our country since 1973, may God renew our minds to see all babies as royalty deserving of life because they are made to be royal sons and daughters.

One thought on “How Royalty Changes the Abortion Debate”