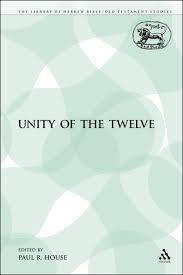 By 1990 there was no consensus on the structure of the Minor Prophets. Observing this fact, Paul House, in his book The Unity of the Twelve, surveyed the way scholars looked to chronology and regional location as possible ways “the Twelve” were ordered. Such approaches were significantly lacking, however, and so he concluded: “It is probable that historical research has not successfully uncovered the structure of the Twelve because that structure is governed by literary principles” (67).

In conversation with literary critics and scholars employing methods of canonical criticism, House shows why we should read the Twelve as more than 12 similar but separated oracles. Rather, by examining the structure and plot of the Twelve we can come to a clearer understanding of the unified message that the Minor Prophets is seeking to convey.

As others have observed in the Psalms, there is an intentional ordering in the Minor Prophets, better termed The Twelve. Historically, these 12 books are always found together and typically in the same order (63). For that reason, a unified study of their message is valid and valuable. And Paul House’s book, though technical, is an important for helping read and understand the Minor Prophets.

To get a sense of his argument and how the twelve prophets are unified, let me share some of his observations—first on the structure of the Twelve, then on the plot of the Twelve.

The Structure of the Twelve

1. Their is an historic unity and arrangement of these books.

Against those who believe the arrangement of the Twelve is imaginary or impossible to determine, House observes,

Centuries ago the ancient community of faith joined these works and thereafter considered them one work. This canonical action merits analysis. [And because chronological and geographical arrangements are inconclusive, see pp. 63–67, 69], it must also be noted that the existence of the book in its final form warrants a literary analysis. (69)

2. As with all the Prophets, there are three repeating themes in the Twelve—sin, judgment, and restoration.

The Twelve are structured in a way that demonstrates the sin of Israel and the nations, the punishment of the sin, and the restoration of both from that sin. These three emphases represent the heart of the content of the prophetic genre. The Twelve’s external structure therefore reflects its literary type. (68)

Since the major thematic aspects of the minor prophets and their neighbors are . . . the sin of the covenant people, the purging of that sin, and the reclamation of the sinners, it is best to envision a tripartite structure of the Twelve. Various sub-structural units will emerge, each one related to its larger heading, but three divisions will dominate. (71)

This is the thesis House seeks to prove in his book. A full perusal of his book is required to evaluate his statement. That said, as the follows points suggest, his proposed outline of the Twelve is developed from a careful reading of the text that makes great sense of the genre and the plotline of the Prophets. Hence, those inclined to object to his thesis need to consider his argument with the Twelve in hand.

4. The tripartite structure can be organized as follows:

** This outline created on the basis of The Unity of the Twelve by Paul House.

5. A summarizing sketch of the twelve books will help solidify the unity of the Twelve.

At the end of each section, House synthesizes his observations. Taken together, they compose a snapshot of how the Twelve are developed.

This brief look at the first six minor prophets in no way exhausts the ways the books mount their case against iniquity. Indeed more interrelationships are noted in the chapter on plot. Still, some foundational assessments arise. Hosea attacks the spiritual infidelity of the covenant people. Joel repeats that theme, then inaugurates the discussion of the sins of all people. Amos, of course, summarizes these notions, and adds much detail about outward transgression. Obadiah, drawing on Amos 9.12, continues to reveal how foreign nations displease Yahweh and at the same time leads into Jonah by denouncing heartless neighbors. Jonah highlights the inward-outward sin of nationalistic spiritual prejudice. Micah provides, like Amos, a summary of other books, and includes keys to repentance and faith. As a group these books are a cohesive unit. They work as a structural whole with a common goal of presenting a devastating picture of sin and its consequences. At this point the wisdom of placing the books in their canonical order is apparent. If the remaining six books fulfill a distinct purpose as well as Hosea—Micah, then the Twelve as a whole is a powerful unit indeed. (88)

It is, therefore, fairly clear that Nahum, Habakkuk and Zephaniah all chronicle the certainty of God’s punishment of iniquity. Whether one nation or many, individual or group, great or small, all will fall prey to the fearful judgment of God. Lest this wrath seem overwhelming, however, these books teach that ‘the just shall live by faith’ (Hab. 2.4), that God is still sovereign (Hab. 3.17-19), that Yahweh is punishing justly (Nah. 1.3), and that a remnant can survive that dreadful time (Zeph. 3.6-20). But sin does have direct and telling consequences. Assyria, Israel, and all the surrounding nations are under Yahweh’s control. Though the punishment seems harsh, yet it is just. (96)

The last three books in the Twelve therefore work together in a very coherent way to consummate the images of hope that appear in the first nine prophecies. Rather than interpreting these prophecies as mere echoes of earlier, greater prophets, one should view them as the final piece of a larger structural whole. They systematically answer questions about who will be restored, what will be restored, and how both will be restored. To remove these works from the Twelve would impoverish both the literary and historical significance of the prophetic message. Without Haggai-Malachi the other books become shadows of what they are when completed by these post-exilic writings. (108)

The Plot of the Twelve

6. Readers must have a general pre-understanding of plot.

House sites Aristotle and other literary critics to describe what a plot is. In short, a plot has a beginning, middle, and end, where a crisis or series of crises escalate until a point of resolution. Thus, he defines the term like this,

While a technical understanding of plot is not needed to read Scripture, it does help to have categories for organizing the material we find.

7. There are five primary characters in the Minor Prophets.

8. A viable plot line becomes visible when we keep the three themes and five characters in view.

The conflict and resolution of the Twelve relates to prophets communicating how Yahweh will judge the sins of Israel and the nations, after which he will bring restoration. Following this storyline, House writes,

Conflict and resolution in the Twelve are closely related to the book’s sequence of events and development of characters. Sin, punishment, and restoration occur because of the activities of the major figures, and all these aspects are fueled by a chief conflict. At its most basic level the Twelve’s conflict revolves around Yahweh’s attempt to forge Israel into a faithful nation. This goal can only be achieved if Israel will keep its covenant with its Lord. Yahweh uses every possible means to get Israel to keep her covenant promises and eventually has this goal for the chosen nation completed. A secondary, but vitally important, goal is to redeem all the peoples of the world. Since Yahweh is the creator of the universe, this desire is quite natural. God’s power will be evident to all when Israel and its neighbors worship their creator as sovereign God. It could be argued, therefore, that the conflict in the minor prophets is the rebellion of the whole world against God. Perhaps, but Israel is the focal point of the prophets’ preaching, so it is best to concentrate on that group as the key to the restoration of the universe. (117–18)

9. In conjunction with the structure of the book, a workable storyline can be adduced.

Based on his reading of the text, Paul House makes the following plot line.

Using the aspects of plot set forth earlier in this chapter it is possible to divide the Twelve into the following parts: introduction to the plot’s major problem (Hosea and Joel); complication of the plot’s chief problem (Amos—Micah); crisis point of the plot (Nahum and Habakkuk); climax and falling action (Zephaniah); denouement, or resolution, of the plot’s problem (Haggai—Malachi). Malachi both completes the Book’s resolution and provides a concluding admonition to the chosen people. (123–24)

Using the literary categories of comedy and tragedy, House argues that the Twelve are essentially a work of comedy, written in a period of tragedy (125). Though the books recount many horrific aspects of Israel’s sin and God’s judgment, the ultimate message is filled with hope. At the end of the story, God will restore his people—thus, making it a comedy.

10. A literary unity undergirds the good news of the Minor Prophets.

While House’s work requires further study and has been been supplemented by many works since 1990, the payoff of reading the Twelve as one unified book is seeing how the message of the prophets both addresses sin and offers hope. Because different books emphasize different themes, these books need one another to give a full gospel presentation. Or to say it better, it is the intention of the canonicler (the one who arranged the Twelve) to awaken Israelites to their sin, to warn them of impending judgment, and to seek God while he may be found. Under the inspiration of the Holy Spirit (cf. 2 Timothy 3:16–17), the Twelve serves all generations of God’s people, convicting us of sin and giving us hope (Romans 15:4).

For this reason, we should seek to read the Twelve in its canonical arrangement, because when we do, we find a powerful and unified testimony that leads us to Christ, the very objective found in Malachi 3–4. Not surprisingly, the Twelve finishes the book with two chapters that foretell the coming of the Lord and prophet like Elijah who will prepare his way. All in all, the placement and content of this final word confirms the need to read the Twelve together.

To be sure, there may be some clarifying that needs to go in the outline listed above, especially in the way House groups the first six books under the banner of sin. But on the whole it seems appropriate to the text and the overall message of the Old Testament to read the Twelve together. And in this way of reading, we will find a balanced message of sin, judgment, and restoration.

Even more, we will find a twelve-panel book that looks forward to Christ, not just in some isolated verses (like Micah 5:2), but in the whole tenor of the collection. From Hosea to Malachi we find an eschatological message that grounds itself in the history of Israel and points us ahead to the Messiah who is coming. In this way, a unified approach to the Twelve helps us avoid the twin errors of Christ-less historicism and text-less Christo-centricism.

9 thoughts on “Reading the Minor Prophets Together: Ten Observations from Paul House’s ‘The Unity of the Twelve’”