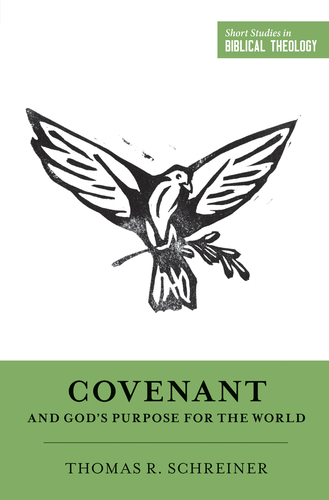 A few years ago, Crossway Books began a series called Short Studies in Biblical Theology. These books are wonderful introductions to various topics on biblical theology. So far they have included,

Most recently, I read Tom Schreiner’s book on covenant, where in 120 pages he unpacks in plain language the biblical covenants from the covenant in creation to the new covenant in Christ. While the whole book is worth reading, I found his discussion on the first covenant a helpful introduction to God’s with mankind mediated through Adam, what some have called a creation covenant.

Six Evidences for a Covenant in Creation

On this disputed understanding of Genesis 1–2, Tom Schreiner summarizes six reasons for seeing a covenant in creation. While his work does not delve into the technical aspects of the debate, his clear presentation should give the reader a strong biblical case for seeing God’s creation in covenantal terms.

Here is a summarized version of his list with a few reflections on his points.

1. A covenant in creation is not dependent on the word “covenant.”

Just like God’s covenant with David, which lacks the word berith in 2 Samuel 7, so the first covenant is not disproven by its lack of terminology. Schreiner writes, “The word covenant doesn’t have to be present for a covenant to exist, contrary to an older word-study approach that today is rejected by virtually all scholars” (20). This linguistic argument is often used against a creation covenant, but as further evidence suggests, this is not a good or sufficient argument.

2. A covenant in creation finds later support in Scripture.

Like the Davidic covenant, which finds linguistic support in Psalm 89:3, 28, 34, 39, so the original covenant with creation finds support in Scripture. For instance, though the translation of Hosea 6:7 is contested, it is best understood as a comparison between Israel and Adam the man, not Adam the place. Schreiner writes,

Remember that Hosea was talking about Israel’s sin and transgression in referring to Adam, and a reference to the place Adam in Joshua 3:16 (the only time the place is mentioned in the Bible) has nothing to do with Israel’s sin and transgression. Actually, the story in Joshua 3 is one of the great triumphs in Israel’s history, where they crossed the Jordan and stood on the verge of conquering the Promised Land. (21)

Combine this argument with the linguistic case for reading Hosea 6:7 as “like Adam” instead of “at Adam” (see Gentry, Kingdom through Covenant, 217–20), and this verse becomes a strong witness for a covenant in creation.

3. A covenant in creation is supported by the “constituent elements” there in beginning.

What are the elements of a covenant present in Genesis 1–2? Schreiner answers,

There were two partners: God and Adam/Eve. God as covenant Lord gave stipulations or requirements, demanding that Adam and Eve refuse to eat from the ‘tree of knowledge of good and evil’ (Gen. 2:17; 3:3, 11). Furthermore, there were cursings and blessings for disobedience and obedience, which, as we shall see, were present in later covenants. The covenant was conditional: if Adam and Eve disobeyed, they would die (Gen. 2:17; 3:3), but if they obeyed they would enjoy life with God. (21)

From these observations, read in congruity with the rest of the Pentateuch, the relationship between God and Adam/Eve is presented in the form of a covenant.

4. A covenant in creation can exist because covenants are not restricted to redemptive compacts.

While some opponents of a creation covenant believe covenants only apply to redemptive agreements, Schreiner argues that there are multiple counter-examples to this. For instance, “Marriage is covenantal even though the marriage covenant isn’t redemptive in nature (Prov. 2:17; Mal. 2:14)” (22). And “many other in Scripture weren’t made in a redemptive context” (23). These include covenants between,

In short space, Schreiner shows the flexibility with which covenants occurred in the Old Testament, thus supporting the notion that a covenant is determined by its own stipulations and not some external formula.

In these two texts, we find a direct comparison between the first and second/last Adam. In both texts, Adam and Christ are portrayed “as representatives of those who belonged to them. They were covenant heads!” (22).

Whereas all mankind sinned in Adam; all those in Christ will be made righteous. The covenantal representation that develops in the rest of the Bible is employed by Paul to speak of Adam and Christ. Thus, there is strong support from Paul’s inspired pen that he sees Adam as a covenant mediator whose actions represent his family.

6. A covenant in creation is strongly suggested by the language of Genesis 6–9.

God’s covenant with Noah was said to be “established” rather than “cut,” which might well indicate that the Noahic covenant was a renewal of the covenant with Adam rather than something completely new (see Gen. 6:18; 9:9, 11, 17). (22)

Although Schreiner does not take this argument to be decisive on its own, he says the weight of evidence is on the side of reading “establish a covenant” as evidence for understanding Adam’s relationship to God as covenantal.

All in all, from these six lines of argument, Schreiner makes a strong case for understanding Genesis 1–2 as describing a covenant relationship between Yahweh (a covenant name) and man.

The Value of Short Studies

From this six-fold outline, we can see a basic, biblical argument for believing in a covenant in creation. To be sure, some may not be convinced by this argument, citing the need for more technical proof. (For such proof, I would recommend the book Covenant and Creation by William Dumbrell or Peter Gentry’s chapter on God’s covenant with Adam in Kingdom through Covenant). However, for most the biblical foundations of Schreiner’s argument should be evident.

Indeed, this is the value of these short studies. In condensed and clear language, they introduce busy pastors and Bible teachers to a wide-range of biblical material on various threads running through Scripture. In the case of Schreiner’s work on the covenants, I found many helpful observations and syntheses that illumined Scripture. For that reason, I would highly recommend his book, as well as the other books in this series. They will edify your soul and better inform your Bible reading. To that end, may we continue to take up and read.

4 thoughts on “Six Biblical Evidences for a Covenant in Creation”