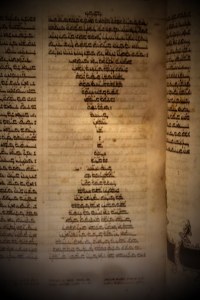 God’s Word is inspired by God, but it is also written by men. And in many cases, these men show incredible literary skill in penning God’s Word. One thinks of Psalm 119’s acrostic praise of God’s Word or Jonah’s detailed use of chiastic structures as examples of authors employing literary devices to shape and structure their God-given, God-inspired words.

The same is true in Genesis 3–4. In a section that is often whisk-away as myth or relativized as poetry, we find that the historical details of Cain and Abel are written with incredible attention to literary style (i.e., history in poetic form). The number of words, the narrative parallels between the first family (ch. 4) and the first sin (ch. 3), and the repetition of expression are just a few ways Moses employs poetics structures to stress the main points of this historical narrative.

In a day when bold and italics were not available and space was limited, these structures evidence the main point of his writing. Moreover, they capture the way in which human authorship is “fully human” (i.e., marked by conventions of human speech). Divine inspiration does not cancel out man’s humanity in his writing. Rather, it improves his acuity, frees his will, and empowers his words. This is what Peter means when he says “men spoke from God as they were carried along by the Holy Spirit” (2 Peter 1:21).

Considering this, we look at Genesis 3–4 as an example of this literary design, where Moses under the inspiration of the Holy Spirit wrote with incredible attention to detail—hence allowing us to interpret with great detail. What follows are some of the observations Gordon Wenham has made to show the lexical and structural detail of Genesis 3–4.

Writing about the literary unit of Genesis 2:4–4:26, Gordon Wenham (Genesis 1–15) observes the specific ways words were counted in Genesis,

The coherence of this block of material is indicated by the opening heading “This is the history of the heaven and the earth” and by the use of numerical symmetry within it. Throughout the Pentateuch, the sevenfold use of divine speech formulae is commonplace (Labuschagne, VT 32 [1982] 268–96), and with in this chapter is is the number seven is clearly significant (cf. vv 15, 24). Unusually full details about Lamech, the seventh generation from Adam (18–24), may illustrate another convention associated with biblical genealogies, a tendency to draw attention to the seventh generation (Sasson, ZAW 90 [1978] 171–85). Indeed various keywords In the narrative appear a multiple of seven times. Within 4:1–17, “Abel” and “brother” occur seven times, and “Cain” fourteen times. Within the whole of 2:4–4:26, “earth,” not “land of,” is mentioned seven times, “land” fourteen times, and “God” the LORD” or “The LORD God” some thirty-five times, exactly matching the thirty-five occurences of “God in 1:1–2:3. The last verse of chap. 4, “At that time people began to call on the name of the LORD,” thus contains the seventieth mention of the deity in Genesis and the fourteenth use of the key word “call” (cf. Labuschagne, VT 32 [1982] 270). (96)

In addition to the lexical details, the fall narrative also shows similarities between Genesis 3 and 4.

The value of highlighting Wenham’s comments about Genesis 3–4 is that it opens our eyes to see the manifold designs of the two authors of Scripture—God and, in this case, Moses. For those who take seriously every jot and tittle of Scripture, this attention to detail in the writer makes it possible to pursue such detail in our interpretation. Indeed, in the New Testament Jesus makes an argument based on a verb tense (Matthew 21:31–32) and Paul on the singular form of a word, rather than the plural (Galatians 3:16). We too should consider carefully the very finest details of Scripture, for they reveal to us the divine intention by means of the literary conventions of the inspired human author.

How Does This Apply?

How might we apply these observations? Let me suggest a couple ways:

All in all, Genesis 3–4 shows how truth is revealed in Scripture—through the beautiful confines of literary forms. Often this takes the form of meticulous word counts and parallel storylines. While the modern reader is not trained to read this way and modern readers are often dubious about this close reading of Scripture, students of the Bible learn to read Scripture on its own terms. And thus, by paying attention to Scripture we learn how to become faithful interpreters.

May God grant us eyes to see and ears to hear what the inscripturated Word of God is saying to us.