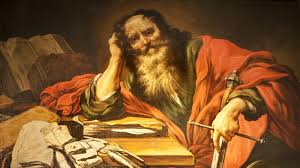 Some time ago, I sat in a Simeon Trust meeting with David Helm, pastor of Holy Trinity Church (Hyde Park) and executive director of Simeon Trust. He began by making this profound point: “disciple-making requires making an argument.” His point was disciples are not formed unless we can persuade them from the Scripture that their beliefs, actions, attitudes are out of sync with God’s will and in need of spiritual renewal.

Indeed, while discipleship is as plain and simple as helping others follow Jesus (Mark Dever’s definition in Discipling), the work is incredibly hard because calling others to follow Christ fully  means calling them to bear his cross in sacrificial ways. Thus, we must learn to make arguments that grip hearts, if we are to make and mature disciples.

Recently, in reading through Acts, I was reminded how much Paul labored to make an argument. He was not argumentative (a mood); more constructively, he made reasoned arguments. In these arguments, he didn’t present the facts and wait for others to make a decision. No, he pleaded, persuaded, and persisted in making his case.

Consider just a few examples from Paul, based on four words used to describe Paul’s ministry. May the Lord use them to spur you to make biblical arguments as you make disciples.

First, Paul’s customary approach was to reason from the Scriptures.

And Paul went in, as was his custom, and on three Sabbath days he reasoned with them from the Scriptures, 3 explaining and proving that it was necessary for the Christ to suffer and to rise from the dead, and saying, “This Jesus, whom I proclaim to you, is the Christ. (vv. 2–3)

From the grammar of Acts 17:2, “reasoned” is the main verb. “Reasoned” (διαλέγομαι) is a word that is also rendered “argued” (Mark 9:34) or “disputed” (Acts 24:12; Jude 9), and it means “to speak in a somewhat formal setting and probably implying a more formal use of language” (Louw & Nida 33.26). In Acts it is used to describe Paul’s manner of speaking eleven times: Paul reasoned in the synagogue with the Jews from the Scriptures (Acts 17:2; 18:4, 19: 19:8); he also reasoned in the hall of Tyrannus, after the Jews rejected him in Ephesus (19:9); and he reasoned before Felix when called to court (Acts 24:25). A softer form of the word, though still in a formal setting, is found in Acts 20:7, 9 when Paul spoke to the disciples in an upper room in Troas. Altogether, whenever Paul stood forth to herald God’s Word, he made a reasoned argument.

Next, Paul opened Scripture to make his argument.

In Acts 17:3 Paul’s usual custom of reasoning in the synagogue is qualified by two participles: “explaining and persuading”  (διανοίγων καὶ παρατιθέμενος). The first word has the sense of “opening” or “unveiling” (Louw & Nida 33:142: “to explain something which has been previously hidden or obscure”).

For instance, διανοίγω is used to speak of God opening Lydia’s heart (Acts 16:14; cf. 7:56) and Jesus opening the Scriptures, the eyes, and the minds of his disciples in Luke 24 (vv. 31, 32, 45). In Paul’s case, he made a reasoned argument by means of explaining from the Scripture how Jesus is the Christ (see Acts 17:2, 11; cf. Acts 13:15ff.). Thus, as Paul sought to make disciples, he did not dumb-down his message. Rather, he explained from the Scriptures the good news of Jesus Christ, and he trusted that in his opening of the Word God would open hearts, eyes, and minds.

Not only did Paul open up the text, he compared the Scripture to the claims he made about Christ and his resurrection. The word “proved” carries the idea of “setting something before someone” (BDAG). For instance, in Acts 16:34 the word is used when the Philippian jailer “set food before them.” In other places, the word speaks of setting teaching before others (see Matthew 13:24, 31). Later in the New Testament, the word carries the weightier idea of entrusting the gospel to someone (see 1 Timothy 1:18; 2 Timothy 2:2). In Acts, its more basic meaning is to set forth the Word of God. In making his reasoned argument, Paul set before his audience the Word so that they could see the relationship between the Old Testament promises and their fulfillment in Christ (cf. Acts 13:32–33).

The fruit of this “proving” is best seen in Berea where his audience responded to Paul’s teaching with a desire to examine the Scriptures. Presuming that Paul’s customary method (Acts 17:2) is employed in Berea like in Thessalonica, we can see why the Bereans tested the things Paul said to them. Paul set the Word before them, explained to them how the Christ is Jesus, and charged them to believe the gospel. Such a method of laying the Scriptures side-by-side with his testimony about Christ coheres with the promise-fulfillment pattern of the gospel, but it does not mean Paul was indifferent about their acceptance of his message. Rather, as Acts 17:3 translates  παρατίθημι as “proved,” he argued from the Scripture that the promised Christ is Jesus.

In his reasoned explanations, he was not indifferent. As his letters prove, he was passionate for others to know Christ. So desirous for the salvation of his kinsman according to the flesh, Romans 9 says he desired to be accursed if it would bring his fellow Jews to salvation. So, its unsurprising he would persuade his audiences to believe his gospel.

Acts 18:3 says Paul reasoned in the synagogue in Corinth. In the same verse, Luke records how Paul “tried to persuade Jews and Greeks” that Jesus was the Christ. In this verse, then, we see that Paul’s rationale arguments were coupled with a burning passion to see unbelievers trust in Christ.

Indeed, the word for persuading (πείθω) is one used of Paul in multiple instances. In Acts 13:43 Paul and Barnabas “urged” (=persuaded) Jews and devout converts to Judaism “to continue in the grace of God.” Likewise, Acts 19:8 says for three months Paul “spoke boldly, reasoning and persuading them about the kingdom of God.” Until the end of Acts, Paul is seen persuading other to believe in Christ: “From morning till evening he expounded to them, testifying to the kingdom of God and trying to convince them about Jesus from the Law of Moses and from the Prophets” (28:23).

In addition to these descriptions, there are accounts of the effectiveness of Paul’s persuasion (e.g., Acts 17:4; 19:26; 28:24), and instances where his persuasion was not accepted (28:24). For instance, in response to Paul message before Agrippa, the ruler asked, “In a short time would you persuade me to be a Christian?” (26:28). To which Paul replied in the affirmative, “Whether short or long, I would to God that not only you but also all who hear me this day might become such as I am—except for these chains” (v. 29). Paul was himself “persuaded” about the veracity of Christ’s death and resurrection (v. 26), and in turn, he was passionate about persuading others.

Dear Disciple, Learn How To Make an Argument

All in all, it is clear Paul didn’t just present facts; he made a biblical argument with equal parts logos, ethos, and pathos—the three classic aspects of Greek rhetoric. Even to those who did not have the Scripture, as when he addressed the pagan philosophers on Mars Hill (Acts 17), he always made an argument. Yes, his approach (namely his epistemic warrant) changed as he argued with men unfamiliar with the Hebrew Scriptures. But his aim was ultimately the same: to testify about the Creator God who will one day judge heaven and earth by the Son who was raised from the dead. In this pagan place, Paul did not quote the Law and the Prophets, but he still made and argument. And so must we.

As David Helm declared and the books of Acts demonstrates, disciples are not made by facts alone. Arguments are necessary. Yes, repentance is granted as a sovereign gift from God, but still God uses means. And one the primary means of making-disciples is making a biblically-grounded argument.

So dear disciple, learn how to make an argument. Watch how Paul and the apostles argue from Scripture that Jesus is the Christ, and then go do likewise. By God’s grace you and I will be used of the Lord to convince many to follow Christ with winsome, biblical arguments that extol the grace of God and the sufficiency of Jesus Christ.