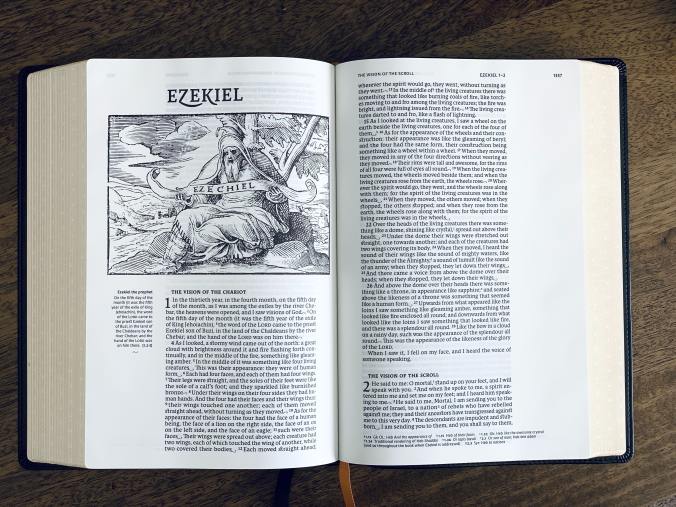 This post is part of a series of resources for the Via Emmaus Bible Reading Plan. This month I am focusing on Ezekiel.

Galatians 3:8 says that God preached the gospel beforehand to Abraham. As he promised that Abraham would be the father of many nations, God revealed his gospel purposes for the world. This truth has many implications, but one of them is that the gospel is something that goes back to the beginning—even to the Garden of Eden (see Gen. 3:15). Accordingly, whenever we read the Old Testament we should expect to find gospel promises of salvation and hope. Even in books that focus on the righteous judgments of God, there will be promises of grace and forgiveness.

This is the gospel message—that God will make a way of salvation for those who deserve eternal condemnation.

God gave this promise to Israel first (Rom. 1:16–17), but he always intended for his salvation to go from Israel to all the nations (Gen. 12:1–3; cf. Rom. 9:25–29; 10:18ff.). In the New Testament, we learn how this works. But we also find how this works by reading the Old Testament in light of the New. In the Prophets especially, we find new covenant promises that are given to Israel and the nations.

Over the last two months, I have focused on Isaiah  and Jeremiah and the gospel hope found in each. This month, I turn to Ezekiel. And again the pattern of salvation and judgment remains. The message of the gospel is found scattered throughout Ezekiel, but it is also seen in the book as a whole.

In this blogpost, I want to offer some help on how to read Ezekiel, so that you can see the gospel in Ezekiel. Like Isaiah and Jeremiah, Ezekiel is challenging because it is so large. But it is also challenging because of how Ezekiel speaks and acts. Therefore, to get a better grasp on the book, I am turning to one of my seminary professors and his book on Ezekiel.

Daniel Block taught Old Testament when I went to Southern Seminary, and his collection of essays on Ezekiel (By the River Chebar: Historical, Literary, and Theological Studies in the Book of Ezekiel, 2013) nicely complements his massive, two-volume commentary on Ezekiel. In class, I remember him saying that his kids grew up with Ezekiel in the house, as he spent fourteen years (!!) working on his two commentaries. To such labor, we are indebted. And to those who read his work on Ezekiel, they will find excellent scholarship and great help for reading this prophet.

In what follows, I am summarizing Block’s introductory notes to Ezekiel.

How the Church Has Read and Preached Ezekiel

Block begins his introductory chapter with a brief survey of Ezekiel’s life in the history of the church. Here’s what he says, put in bullet points,

Clearly, we come to Ezekiel at a time when most preachers have used the book of Ezekiel in ways foreign to its original meaning. This means, we need to work hard to let Ezekiel, and not Hal Lindsay, speak. To that end, Block’s six preaching strategies are helpful.

After introducing the way Christians have preached Ezekiel, Block moves to six propositions for preaching Ezekiel today. While aimed at the preacher, these propositions serve well to help us read the book. He states that “In order to preach from Ezekiel with authority and clarity, . . .

Taking these propositions in reverse order, we gain a helpful approach to this book.

First, we need to have a plan for [reading] Ezekiel.

For the preacher, Block encourages preaching familiar passages (chs. 1–3, 18, 34, 36:22–32, 37:1–14) and others from all parts of the book. In this proposition, he suggests that preaching series do not need to cover every part of the book, but enough to give the full sense of Ezekiel. I have mixed feelings about this counsel and will have to consider it more fully when (Lord willing) I preach Ezekiel. For now, I would simply reiterate the need to have a plan for reading all of Ezekiel.

Here’s a simple approach that permits you to read the book in two weeks time.

The literary structure that stands behind this breakdown will become more evident below.

Second, we need to recognize that Ezekiel is the most vivid—and shocking—prophet.

To understand Ezekiel’s way of speaking, Block offers five keys. We should consider how Ezekiel (1) develops earlier passages in the Old Testament, (2) arranges his message, (3) communicates with “shocking imagery” and other literary idiosyncrasies, (4) employs the number seven to frame his oracles, and (5) delivers his prophecies with speech and action. While these keys do not immediately produce understanding, they do acknowledge the challenge we face when we read the book.

Third, we need to understand the theological message of Ezekiel.

Block has two chapters dedicated to this point, but for starters he identifies Israel’s ‘house of pride’ as the centerpiece of the book. In other words, supported by four pillars—(1) land, (2) covenant, (3) Zion, and (4) David—Israel took pride in their elect position. Ironically, this pride in God’s blessings lead them to invite his curses. And in his forty-eight chapters, twenty-four (chs. 1–24) are dedicated to tearing this house of pride down and the other twenty-four (chs. 25–48) are dedicated to seeing a new house built up. Such is the message of judgment and salvation in the book, which not surprisingly is supported by its literary arrangement.

Fourth, we need to see the literary structure of Ezekiel.

Readers of this blog know how much I stress the literary structure of Scripture, and that is why I turned to Block’s book. He spends considerable time in his introductory chapter supplying an outline of the book. And I adapt his outline in the charts below.[1] Here’s how he begins,

Describing the outline of the book, Block details the following,

Putting this description into visible outline, we can organize the data like this.

From this reflection on Ezekiel as a whole and Ezekiel in chapters 25–32, we can see the detail with which Ezekiel is organized. This teaches us to keep our eyes out for intentional structuring, and especially for the many places where God’s word comes to Ezekiel and the refrain “they will know that I am the Lord.”

Additionally, as I will show in a future blogpost, Ezekiel 33–48 serves as a gospel proclamation unto itself. It begins with the promise of a new shepherd (chs. 33–34); it proceeds to describe the coming of a new covenant (chs. 35–37), complete with resurrection and restoration of Israel (chs. 37). Then, with this resurrected people, Ezekiel describes a spiritual battle that ensues (chs. 38–39) and that results in the purification and reconstruction of the temple (chs. 40–47). This is the gospel in type and shadow—a gospel that has come in Christ and is now spreading through the world.

Again, if we listen to Ezekiel with the rest of the Bible as our guide, instead of importing Dispensational fancies into the text, we will begin to see how this book has been fulfilled in the life, death, resurrection of Christ. Indeed, John’s Gospel depends so much on Ezekiel 33–48, because he sees those chapters as finding their telos in Christ. Similarly, Ezekiel 33–48 is best interpreted through the lens of John’s Gospel.

More on that to come. For now, let me finish with Block’s two final propositions.

Knowing the condition of the audience helps explain why Ezekiel must be so shocking. The people won’t get it, unless he comes with shocking imagery. And even then, they won’t get it.

The condition of the people also explains why Ezekiel is so Israel-centric. Yet, it should be remembered that God’s plan for blessing always included the nations. And hence, all the priest-temple-covenant themes in Ezekiel do not exclude the Gentiles. As we read, we discover how the new covenant blessings for resurreted Israel will overflow to the entire world (see Ezekiel 47).

Sixth and last, we need to understand the prophet Ezekiel.

This is where Block begins his chapter, and rightfully so. Ezekiel is an ‘eccentric’ prophet whose words and actions have often been subject to scrutiny. Yet, his ‘lived experience,’ is deeply connected to the conditions of Israel. Therefore, to understand what God is doing to his people requires understanding what is happening to Ezekiel. The proliferation of dates in Ezekiel’s prophecy reinforce this connection to Israel.

By comparison, Ezekiel is more autobiographical than any other prophet, with the exception of Hosea. Without fixating on himself, Ezekiel is embodying the word. Indeed, from his first prophecy which includes lying on his side for more than a year (ch. 4) to the death of his wife (ch. 24), Ezekiel is doing more than speaking God’s Word. He is incarnating it! Accordingly, to understand Ezekiel the book, we must understand Ezekiel the man. And more, with this incarnation of the Word in Ezekiel, we find one of many ways this book prepares the way for Christ.

Take Up and Read Ezekiel

There is certainly more that needs to be said in an introduction to Ezekiel, but with these six propositions in place, you are on solid ground for reading the book. Even more, seeing the book as a whole—moving from judgment to salvation—helps us see the gospel in Ezekiel.

In the weeks ahead I hope to return to the outline of Ezekiel 33–48, and if you know of any other helpful resources on Ezekiel, please share in the comments.

Photo by Tim Wildsmith on Unsplash

2 thoughts on “‘Then They Will Know That I Am the Lord’: How Seeing the Structure in Ezekiel Shows Us the Gospel”