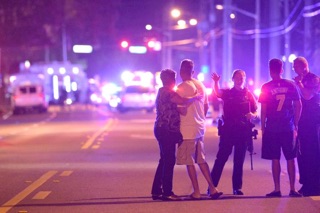 In the wake of the Orlando shooting, our summer intern (Timothy Cox) and I drew up a biblical response for our church. Our hopes were to clarify the differences between the Bible and the teachings of Islam. Although one Bible verse (Leviticus 20:13), taken out of context, calls for the death of gays and lesbians, Christians should never accept this as a blanket endorsement for the violence we witnessed in Orlando. Rather, Christians must defend the poor and oppressed without running roughshod over the Bible. The fulfillment of the law is love (Romans 13:8), and thus as the sacrificial love of Christ constrains us to share the gospel of grace and truth with a lost and dying world, so it compels us to rightly interpret Scripture so that we may be ready to give an answer for the hope that we have in the gospel. That was the intention behind this article.

May God use these words to clarify what Scripture does and does not teach about capital punishment, so that Christians would love *all* their neighbors. And may all our neighbors know the propitiating love of God promised in the Law and fulfilled in Christ.

In this is love, not that we have loved God but that he loved us
and sent his Son to be the propitiation for our sins.
— 1 John 4:10 —

In the aftermath of the Orlando massacre, where 49 people were killed and over 50 injured at a gay night club, Christians weep for the loss of life and are left wondering what to say or do. On social media, trending topics have included gun control, terrorism, homophobia and Islamic extremism. In light of the terrorist’s professed allegiance to ISIS and other radical Islamic groups, it is especially important for Christians to distinguish between the Quran’s teaching on homosexuality and the Bible’s. Now, more than ever, it is important we convey gospel-centered compassion, even as we hold firm to biblical truth.

“If a man lies with a male as with a woman, both of them have committed an abomination; they shall surely be put to death.”

Read by itself, this passage may seem to catch Bible-believing Christians red-handed with a verse that proves their Bible needs to be updated or abandoned. However, because the Bible is not a collection of individual sayings; Leviticus 20:13 must be read in light of its historical and covenantal context. Indeed, only a whole-Bible theology of sexual ethics and capital punishment can rightly explain this verse.

With this in mind, we will show why this verse does not permit violence against homosexuals, and why the Bible is fundamentally different than the Quran and Islam’s other holy books, which do endorse violence towards the LGBT community. In actuality, the command for capital punishment in Leviticus 20:13 becomes a pathway to Christ’s substitutionary death, not a harbinger of hate.

What Does Islam Teach about Homosexuality?

The Quran speaks of homosexuality in several passages (e.g., Surahs 7:80–84; 26:165–166; 27:54–58; 29:28–29). These Surahs provide a paraphrase of the biblical account of Lot and his family fleeing Sodom. Similar to the biblical account, homosexuality is condemned as a wicked transgression, and the inhabitants of Sodom are judged with a shower of brimstone. In addition to the Quran, Islamic teaching incorporates hadiths (i.e., sayings of the Prophet Muhammad) which decry homosexual practice and condemn homosexuals to death.

Additionally, a 2014 fatwa (i.e., an official edict from a recognized Islamic authority) proclaimed that homosexuality is “abnormal” and “abhorrent” and confirmed that gays should be killed: “The punishment for men or women who are unwilling to give up homosexuality and who therefore reject the guidance of Allah Most High is in fact death according to Islam.”  An imam invited to speak at a Florida mosque in 2016 said that killing gays was an “act of compassion.”

These extreme teachings by Muslims have led some to draw comparisons to Christians or simply to blame Christians outright. Passages such as Leviticus 20:13 seem to add fuel to claims that all religions are the same and hateful towards homosexuals. Yet, unlike Islam and the Quran, New Testament Christianity reads the laws of Moses through the completed work of Jesus Christ and the establishment of a new covenant (i.e., a new relationship between God and man). In order to understand the biblical position on homosexuality, one must draw from the “whole counsel of God” (Acts 20:27), recognizing the way in which commands like Leviticus 20:13 fit into the progress of revelation and the ethical norms of biblical Christianity.

What follows is an attempt to help Christians (and others) understand and explain the fundamental difference between the Quran and the Bible as it relates to homosexuality and why only the Christian gospel offers abiding mercy and truth.

When read in isolation, Leviticus 20:13 might lead some to believe that because God commanded the execution of homosexuals in one culture at one time, the Bible teaches Christians everywhere at all times to act with violence towards homosexuals. Such a reading, however, misunderstands the original context of this verse and the Bible’s teaching on homosexuality, capital punishment, and the gospel of Jesus Christ. Simultaneously, it misconstrues the holy love of God which perfectly judges sinners and provides a way of escape from judgment for all who trust in the sacrifice of Jesus Christ. To get a handle on these delicate subjects, we need to consider capital punishment at three levels—for all humanity, in the church, and in the state. From there, we are ready to see how the bad news of Leviticus 20:13 leads us to the good news of the gospel.

First, Leviticus does not condemn homosexuality alone. God’s Word condemns all forms of human sexuality that deviate from God’s design for marriage (cf. Genesis 2:18–25). In Leviticus, a book reinstituting God’s holy design for his covenant people, chapter 18 lists numerous sexual perversions; homosexuality is but one (v. 22). In this way, Leviticus 18 and 20 (like Jesus’ words in Matthew 5:27–30) condemn all of us. No one escapes, no one is sexually pure; all have fallen short of God’s perfect holiness (Romans 3:23). Therefore, while biblical Christianity teaches homosexuality is sin; it always does so in the context of other sins (see the vice lists of Romans 1:18–32; 1 Corinthians 6:9–11; 1 Timothy 1:9–10).

The contemporary application from Leviticus 18 and 20 is not to attack the LGBT community. Rather, it gives a prophetic warning to all sinners. By nature (Ephesians 2:1–3), by family relation (Romans 5:12, 18–19), and by choice (Ezekiel 18:4, 20), mankind stands under God’s righteous wrath—a capital punishment far greater than anything experienced in Old Testament Israel. In this way, the Bible speaks to all humanity to flee sexual immorality (1 Corinthians 6:18) and to find refuge in the substitutionary death of Jesus Christ.

Second, only by reading Leviticus 20:13 in its covenantal and historical context will we be able to see how this commands fits into the whole canon of Scripture. Unlike the Quran, whose books are largely arranged by size and written without a unified storyline, the Bible is a historical book bound together by God’s eternal plan to unite all things in Christ (Ephesians 1:10). At many times and in many ways, the Bible reveals the saving purposes of God. Accordingly, we must not directly apply Moses’ words to ourselves without understanding how they fit into God’s progressive revelation.

More specifically, the New Testament authors, following Jesus, teach us to read the Old Testament commands through the new covenant mediation of Christ. In this way, we neither deny the words of Leviticus 20:13 (as progressives do), nor do we apply them the way that Muslims do the Quran or hadiths. Instead, with eyes affixed to the interpretative principles of Jesus and his apostles, we learn how to read the Law of Moses.

From them, at least three things should be said.

Capital Punishment is Given to the State

Third, the Bible does teach capital punishment. In Genesis 9:6, God told Noah, “Whoever sheds the blood of man, by man shall his blood be shed.” This command is given to uphold the value of mankind and to warn would-be murderers that they forfeit their own life if they kill another. Later, the Decalogue reiterates, “Thou shall not murder” (Exodus 20:13) and reveals that anyone who sheds blood will themselves lose their life. Leviticus 20, then, lists at least seven reasons for capital punishment.

Against this backdrop, the New Testament teaches that God says that governors and governments do not hold the sword in vain. Romans 13:1–7 explains why: God has granted authority to the state to be his ministers of justice (cf. 1 Peter 2:13–17). To protect the innocent and establish the rule of law, God has given the state a right to punish evil-doers (Romans 13:4–5). This means, God condemns all self-asserted forms of violence—vigilante justice, jihad, or hatred that leads men to strike down God’s image (Romans 12:17–21). Individuals never have the right to kill another, and only those under oath may act as officers of the state.

Therefore, Christians must weep over the loss of life in Orlando (and everywhere else). We pray for God’s mercy to comfort those who are grieving, and we stand to defend the lives of those being threatened—even if we hold different theological or ethical views. Compassion is always right and Christ’s love compels us to serve and protect the poor and oppressed.

Death Drives Us to the Gospel

Ultimately, the purpose of God’s Law is to drive us to the gospel (see 1 Timothy 1:8–11). Only Jesus, God’s sinless Son, was undeserving of death. Only Jesus stood before God as innocent, righteous, and sexually pure. Yet, in his great love he volunteered to endure his Father’s wrath and the Law’s sentence of execution. And he did this to receive in his body the judgment due to man.

Leviticus 20:13 is one verse among many which points to the common plight of humanity. As Paul writes in Romans 3:23–25:

For all have sinned and fall short of the glory of God, and are justified by his grace as a gift, through the redemption that is in Christ Jesus, whom God put forward as a propitiation by his blood, to be received by faith.

In truth, this “bad news” discomforts us—all of us, not just one group of people. But it also has the power to deliver us—for any who has ears to hear. For unlike Islam, which has no mediator to reconcile persons to Allah, the triune God makes salvation possible when the Father sends his Son to die in the place of sinners. Therefore, every part of the Old Testament, Leviticus included, is written so that we might look away from ourselves—away from our law-keeping and away from our libido—to find life in the Lord who died and rose again.

In this way, Leviticus 20:13 is neither an invitation for Christians to take up arms against the LGBT community, nor is it the final word against gays, lesbians, adulterers, and sex traffickers. Rather, it is a word that invites everyone to humble themselves before a holy God, confess their sin and find salvation in Jesus Christ—the son of God who died for all sexual sinners. This is radically different from the teachings of Islam, and it proves once again that holiness and love can only be held together in the gospel of Jesus Christ.

2 thoughts on “From Capital Punishment to Christ’s Propitiation: What Leviticus 20:13 Means for Christians Today”