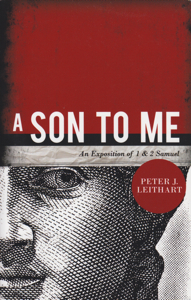 Few biblical commentators have a more fruitful mind than Peter Leithart. Sometimes his observations take off on a flight of fancy; other times they open fresh vistas of  biblical glory. In both cases, the judicious reader will find plenty to chew on. Personally, I have frequently initially disagreed with his reading only to be convinced later. Make no mistake, however, you should read his commentaries.

Right now I am reading his commentary on 1–2 Samuel, entitled A Son to Me. In it he makes a compelling argument for seeing Saul as a New Adam (81). He shows many ways how Saul, as a royal figure, falls from grace and repeats the fall of Adam—the first royal son. To set up his argument, he makes a compelling argument with regard to the land, and it is that argument I want to cite here.

What Leithart suggests is that the whole of biblical history (and geography) must be understood according to a tripartite division of the land. I have seen this kind of argument before (cf. G. K. Beale, T. D. Alexander, etc.) with regards to three parts of the tabernacle/temple, but I haven’t seen it so concisely described with regards to the “three environments” of the land.

Because the temple is made to mirror the rest of creation and vice versa, this argument should not surprise us. But, for most of us situated over three millennia from Moses and David, it is likely that we haven’t thought of the land in the way Leithart describes. Therefore, to better understand God’s geography, it is vital to have our minds renewed by the Bible when it comes to understand the world we inhabit.

In the original creation, the world was divided into three environments. The garden was east in Eden (gen. 2:8), not identical with the land of Eden but a section of Eden in the eastern part of the land. This implies that there was a separate environment called the land of Eden. In Genesis 2:10–14, moreover, we learned that there were other lands as well. The original creation was divided into garden, land, and world ,and these correspond to the three environments of later biblical history: the garden became the sanctuary, the house of God; the land of Eden corresponded to the land of promise; and the outlying lands were analogous to the Gentile nations.

Each of these environments had a particular relation and a particular task. The garden/sanctuary was the place of worship and the relationship to God as father; the land was the place of work or the home and highlights man’s relation to God the son and brother; the world or the nation was the place of witness and in it man related to God the Spirit. In Genesis, these three environments were the locations for the three falls of man: Adam fell in the garden with the sin against God (Gen. 3), Cain sinned in the field by killing his brother and was cast out to wander East of Eden (Gen. 4), and the sons of God intermarried with the daughters of men (Gen. 6). The patriarchal stories match up with it and reverse the sins in a rough way: Abraham established worship in the land, Jacob contended with his brothers and relatives, and Joseph was a witness in the Egyptian empire. (84–85)
As you can see, Leithart argues that this tripartite division of creation informs the rest of biblical history. If he is on the right track, and I think he is, we should do well to remember these spatial relationships and the various realms of activity associated with them (worship, work, witness).
As I said, Peter Leithart is an illuminating commentator. And here he helps us see that land in the Bible ought to be interpreted theologically, not just geographically. Failure to consider the land theologically misses much of rhetorical punch that the Scriptures are meant to convey. Conversely, when we see how God created the world with its “three environments” it helps us read and understand the plot lines of stories like Saul and major narrative of redemptive history.
Lord, open our eyes to behold the wonder of your Law—not to see in them what is not there, but to see what is there, boundless glories to help us know you, your world, and our work.
Soli Deo Gloria, ds