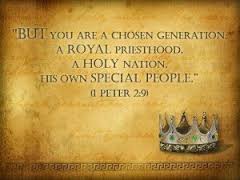 On Monday, I made the case that we should understand the imago dei in priestly terms. To develop that idea a bit, let me show how the biblical story line can be understood through the lens of the priesthood, as well.

In creation Adam was made to be a royal priest. Genesis 2:15 says, “The LORD God took the man and put him in the garden of Eden to work it and keep it.” Or it could be translated “to serve it and guard it.” In other words, the man in the Garden was more than a prehistoric gardener. He was a royal priest. And we know he was a priest because the language used in Genesis 2:15 is used repeatedly of priests in Numbers 3. Moses, the author of both books, is making the point that Adam was stationed in the Garden as a priest—to serve the Lord by cultivating the Garden (even expanding its borders) and to guard the Garden from unclean intruders (a key work of the priest and one he failed to do in Genesis 3). In short, redemptive history begins with a priest in the Garden, one whose righteous appearance and holy vocation was breathtaking, as Ezekiel 28:12–14 describes,

You were the signet of perfection, full of wisdom and perfect in beauty. You were in Eden, the garden of God; every precious stone was your covering, sardius, topaz, and diamond, beryl, onyx, and jasper, sapphire, emerald, and carbuncle; and crafted in gold were your settings and your engravings. On the day that you were created they were prepared. You were an anointed guardian cherub [A better translation is the NET: “I placed you there with an anointed guardian cherub“]; I placed you; you were on the holy mountain of God; in the midst of the stones of fire you walked.

Sadly, this glorious beginning did not last long.

In the fall Adam and his offspring lost their glorious privilege of dwelling in the presence of God. Ezekiel 28:15–19 puts it this way, speaking of Adam.

You were blameless in your ways from the day you were created, till unrighteousness was found in you. In the abundance of your trade you were filled with violence in your midst, and you sinned; so I cast you as a profane thing from the mountain of God, and I destroyed you, O guardian cherub, from the midst of the stones of fire. Your heart was proud because of your beauty; you corrupted your wisdom for the sake of your splendor. I cast you to the ground; I exposed you before kings, to feast their eyes on you. By the multitude of your iniquities, in the unrighteousness of your trade you profaned your sanctuaries; so I brought fire out from your midst; it consumed you, and I turned you to ashes on the earth in the sight of all who saw you. All who know you among the peoples are appalled at you; you have come to a dreadful end and shall be no more forever.” (Ezekiel 28:15-19 ESV)

Therefore, while humanity retains a shadow of his previous glory; the substance was lost in the first sin. When you step away from the mirror, your reflection is gone. Likewise, when the Lord cast humanity away from his presence, his glory departed. Ichabod! Or more exactly, his created glory (i.e., humanity) was radically distorted. Created in covenant relationship with God, there remains in every human a likeness and hope for resurrected glory, but in this age our priestly glory is fading. It is nothing like what is described in Ezekiel 28.

Enter God’s plan of glory renewal. In redemption Christ came to restore human glory. By becoming the pioneer of salvation, Jesus became the first-fruits from the dead, the Son of God who was declared God’s Son when had perfectly obeyed his father (Heb 5:5–10). He received glory (in his resurrection) when he obeyed his father unto death. It is now through him that the image of God is being restored (Eph 4:23–24) to those who were predestined to be conformed to the image of Christ before the foundation of the world (Rom 8:30). This is the goal of the gospel today—to restore to fallen humanity the glory of creation. Because of our sin, such glory is off limits to us. It cannot be attained by human effort. However, in Christ and his death resurrection, eternal glory is possible for those who are called out of darkness and into his glorious light.

First John 3, says that when we see him we will be like him. Unlike what Mormons teach and New Age religions proffer, we will not become gods ourselves. We will forever be dependent creatures. Nonetheless, in the resurrection we will put on the imperishable and become truly glorious. This is not something we can boast about or take credit for; it is the Lord’s work. But it is a work done for our good. It is a glorious reality for all those who are royal priests in the household of God.

To make a long story short. The first Adam was created in the image of God to represent God and reflect his glory. But in both of these ways (representation and glorification), he was to do so as a priest. This is not to say that humanity or Christ is only a priest to the exclusion of being a royal son or a prophet. It is to say that humanity is priestly in its nature or essence, just as it is royal and prophetic. Along with those two offices, the imago dei is priestly. And to fully grasp what it means to be human, we must be aware of humanity’s priestly calling.

May God give us such light from his Scriptures, that we may carry out our priestly calling as men and women made in his image, redeemed to serve him both now and forever.